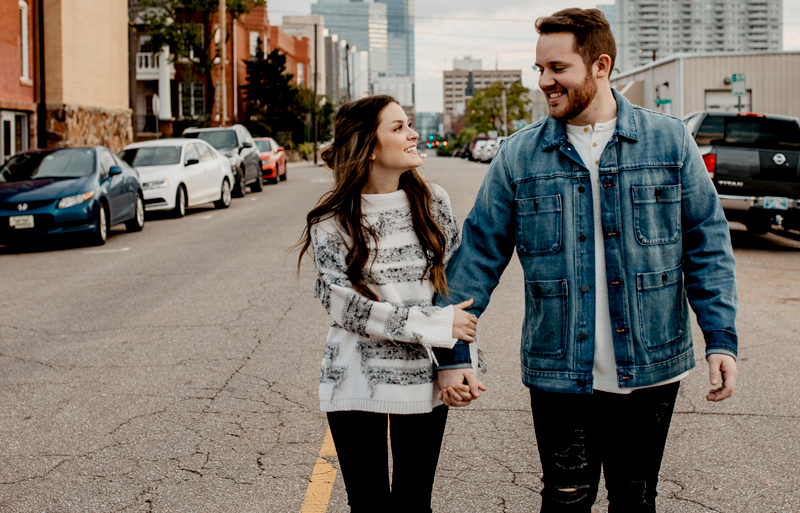 A few nights ago, I went to a storytelling event where the theme was “Romance or Not.” As you might expect, the stories told were largely about relationships and the hilarious, disastrous, wonderful adventures they can be.

One woman, in particular, described her marriage as akin to “packing for a ski trip and landing on the Caribbean.” There were ups and downs, challenges and blessings that she could not have foreseen. Part of that included differences in values between her and her husband.

When the couple met, she was a working woman with an intimidating career history. She and her soon-to-be husband had come to the agreement that she would continue her career well into their marriage. It was what they both wanted. After all, two paychecks are better than one, right?

However, things took a turn the first moment she held her baby boy in her arms less than a year after getting married.

She didn’t want to go back to work anymore, but her husband’s opinion on the matter had not changed.

And so, almost immediately after the birth of their first child, a baby elephant that she named “Elephantina” was also born into their relationship.

The more you discuss and really listen to each other’s perspectives, the less you’ll get caught off guard when your loved one doesn’t agree with you.

Over the years, Elephantina grew. She began to take up more and more space in their relationship, and the strain became increasingly palpable. Marriage counseling was “okay” but didn’t seem to be doing the trick. The woman admitted that they reached a point where, though still together, neither she nor her husband wore their wedding bands. Her husband was gone a lot, and most of their communication took place over text.

Would their marriage survive the enormous presence of Elephantina—the vast space between them resulting from their different values?

You’d be hard put to find someone who agrees with you on everything. But how different is too different?

I mean if you don’t like olives, cool, more for me!

But what about the big things: religion, parenting styles, financial decisions . . . These are things that have the potential make or break a marriage. These are the things that make Elephantina grow big and tall.

In fact, disagreements on finances are one of the leading causes of stress in a relationship. Other top reasons for marital discord—and even divorce—are sexual differences and different core values or beliefs.

Giving a friend a ride home even if it's out of the way, waking up early to make breakfast for a loved one, choosing to forgive over holding a grudge . . . Sacrifices, big and small, can make a lasting impact. See more from #BETTERTOGETHER at the link in our bio! #MarriageTip #SelflessLove #SelfSacrifice #RelationshipAdvice #MarriageQuote #RelationshipGoals

You can imagine why this last one especially complicates long-term relationships: he wants to go to one church, and you want to go to another (or no church). She thinks technology is fine for children, while you’re convinced it’s detrimental to their development. He wants to save as much as possible, she’s more focused on enjoying earnings in the present.

And so on. At first, these sorts of issues may not seem like a big deal. But the longer you’re with someone, and the more your lives become entwined, the more difficult it can be to prevent these different outlooks on life from getting between you.

When you find yourself consistently on a different page from your spouse or significant other, you can try these strategies for confronting the challenge that different values in marriage can provide.

If you’re not married yet, for goodness’ sake, make sure to talk about important things. And know that not all big things feel like big things.

How you both unwind after a long day for work, for example, may seem like a trivial detail, but when you live together and experience each other day in and day out, one of the best things you can do is allow the other to decompress the way they want.

Why? Because, say your brand-new husband comes home after a long day at work and you can’t wait to tell him everything that happened to you today. He, on the other hand, desperately wants to just sit for a few minutes and think about nothing. Imposing your need on him will frustrate him because he really needs to chill, and you aren’t allowing him to. It will also be disappointing for you because you know he isn’t listening or responding to what you are saying.

The end result is two people who didn’t get their needs met and are angry at each other because of it. Now your precious evening together has been hijacked by simply not knowing what each other needed in that moment. If you understand that he needs to relax for fifteen minutes right when he goes home, then, when he is ready to listen, you can get what you need: a good listener.

Strengthen your marriage by diving into the key topics every couple should discuss on a regular basis. You might be surprised what you learn about each other!

Other things such as how you prefer to spend money (going out to dinner, new clothes, gym memberships, travel, etc.), what your stance is on organized religion and why, what chores you like and which you really hate, traditions that are really important to you and why, how many children you would like to have and when, thoughts on private school versus public versus homeschooling . . .

The more you can cover beforehand the better. Not necessarily because you’re on the lookout for dealbreakers—although you should know what those are for you—but so the transition to married life is smoother.

If you’re already married, all is not lost. Maybe you’ve already figured some of this out—maybe the hard way. But if not, now is a great time to broach some of these topics. The more you discuss and really listen to each other’s perspectives, the less you’ll get caught off guard when your loved one doesn’t agree with you, and the better you can respond with love instead of reacting negatively to your disagreement.

This especially applies if you’re already married: you are a team. You are on the same team. You are not just you anymore, you are “we.”

You are each entrusted with the wondrous task of uplifting and encouraging each other, even when you don’t agree.

And if that’s not clear enough, I don’t know what is!!!

The point is, while you are both complete individuals on your own, you are two individuals who have become a united front. This means that while you can and will have disagreements—even on big things—it’s important to not view each other as the opposition.

You are not trying to “win over” your spouse or significant other to “your side.” It’s not your job to convince them of your argument or to prove them wrong. You can share your perspective should explain your reasoning, but that’s where the persuading ends and the accepting begins. You can accept that there is room for differences within your “we.”

You can accept that your loved one is not an extension of yourself.

You can accept that you married someone with their own thoughts, experiences, hurts, dreams, and strengths different from your own.

You can accept that you cannot and should not try to change the person you are with.

This is what it means to love unconditionally. You are no longer just you, you are “we”—even when you disagree.

Infuse Your Marriage with Passion and Purpose

Passion & Purpose for Marriage is a half-day event that is enriching marriages across the country. Through Dr. Allen Hunt’s humorous commentary and heartfelt real-life stories, you’ll discover how to fill your relationship with energy and fulfillment that will transform your lives. Don’t miss the opportunity to attend this event in a city near you!

Practically speaking, to develop this “we-ness,” it is essential that you practice empathy as often as you can. Part of uniting yourself to your beloved means a continual effort to see them. This means not only doing your best to understand superficially what they believe and why, but also really delving into their experience. To put aside your own thoughts, experiences, opinions, and to put yourself instead in their shoes. Ask questions, listen, and use your imagination to get a glimpse of the inner workings of your loved one.

Imagine what it’s like to be them: What do they feel? Why do they feel it? What experiences have influenced their opinions?

At the end of the day, through each other’s differing opinions and beliefs, there should be a high level of regard and respect of each other. Never should we condescend our significant other because of what they believe or feel. Nor should we compromise what we believe or feel. You don’t have to sacrifice what you value to make your spouse happy. You can be open to their opinion and the fact that they could be right, but that’s a conclusion you want to arrive at, not be forced into accepting.

Respect means having an appropriate reverence toward your beloved as an incredible human being worthy of love and adoration.

There can be disagreement within relationships and marriages as long as there is a healthy respect of each other.

And respect means not asking, “Are you crazy?” or, “How can you think that?” And not saying, “That’s ridiculous.” Respect means having an appropriate reverence toward your beloved as an incredible human being worthy of love and adoration.

You are each entrusted with the wondrous task of uplifting and encouraging each other, even when you don’t agree.

In practice, this looks like listening, thinking before you speak, and always using words that uphold the great dignity of your spouse.

In case you’re wondering, the woman at the storytelling event did stay with her husband. They have been married for over fifteen years. He was at the event with their two children listening to her speak, and he kissed her when she sat down after she finished telling her story.

Elephantina is still alive and well—they have disagreements and areas where they don’t see eye to eye. But despite the challenge these differences present, they have chosen to stick together and accept the beauty that is a union of two different people.

And she’s never gone back to work. 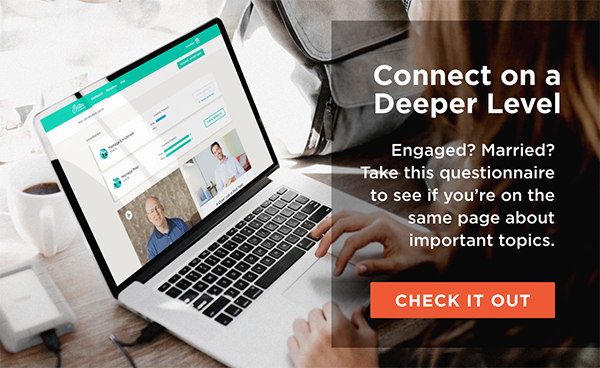 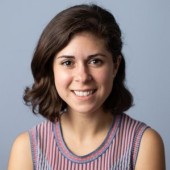 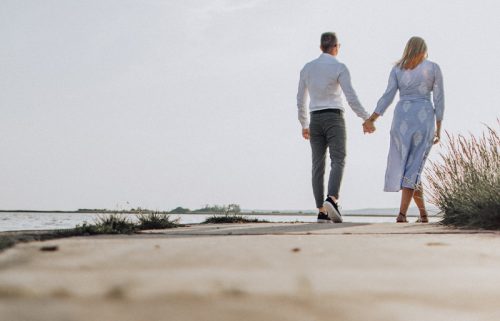 Marriage 101: Talking to Your Spouse About Your Past 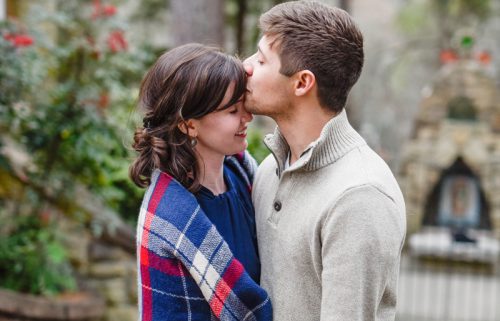 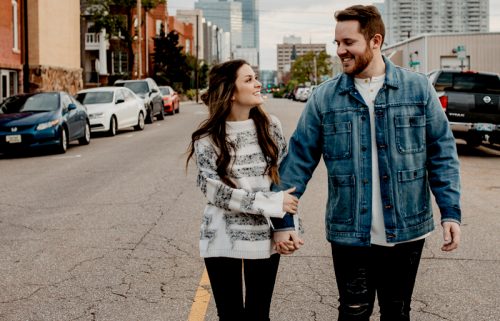 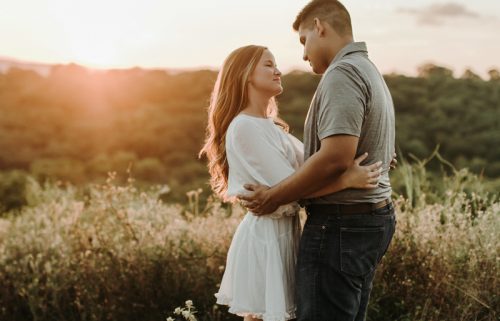 Considering Divorce? Why Love Is Enough