Nobody likes feeling taken for granted. And yet, we all take people, and things, and opportunities, and even God for granted from time to time.

This month, I would like to issue a gratitude challenge. Every day for the next 30 days, I challenge you to do two things:

1. Take two minutes to reflect on all you have to be grateful for, and thank God.

2. Express your gratitude to someone in your life.

Do these two things each day for the next month, and you will be amazed how two, two-minute exercises can have such a powerful impact on your life and relationships.

I am grateful for you . . . all the people who read my books, come to my events, pray for me, and become Ambassadors to join us in this work! It is a privilege to serve you and I thank you. 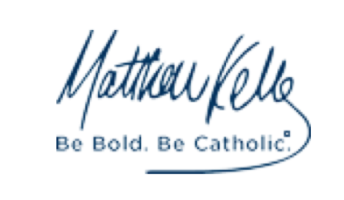 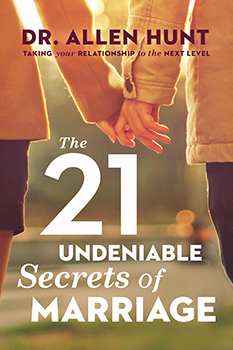 Marriage has a potent impact on your life. Marriage can help you become the-best-version-of-yourself and get to heaven.

— From “The 21 Undeniable Secrets of Marriage” by Dr. Allen Hunt

The 21 Undeniable Secrets of Marriage

I am embarrassed to admit it, but it's true. When my wife, Anita, and I were celebrating twenty-five years of marriage, I finally understood a crucial secret about life. Frankly, it should not have taken twenty-five years for it to become so obvious to me.

What's the secret? Your decision to marry will almost certainly be the most significant and influential decision of your life.

There it is, in plain words. A truth almost no one will speak out loud.

Why is your marriage decision so important? First, because your marriage will bind you in a relationship so close and so intimate that it will profoundly shape your whole future. Second, because your marriage will also deeply impact and affect the lives of the people around you for the rest of your life. In fact, this one crucial decision—the selection of your husband or wife—will not only influence every aspect of your life; it will also affect your entire family (your parents, your siblings, your children, all of them) in ways you cannot anticipate, well after you are dead and gone.

Just think for a moment about a few key figures from the Old Testament. Jacob invested more than fourteen years to marry Rachel, and that patience set him up for a fruitful life. Samson, on the other hand, continually fell in love with various women. In the end, that proved to be his demise. King David allowed his eye to wander and became captivated with Bathsheba. His effectiveness as a leader never recovered. Solomon refused to obey God, married non-Hebrew women, and critically damaged his own reign as king.

Again, your decision to marry will most certainly be the most significant and influential decision of your life. Perhaps that's why Proverbs 4:23 reminds us, "With all vigilance guard your heart, for in it are the sources of life."

There's no denying the truth. Marriage has a potent impact on your life. Marriage can help you become the-best-version-of-yourself and get to heaven. Or it can slowly erode you from the inside out, like some kind of relational Chinese water torture. With so much at stake in a single decision, it seems obvious that you would want to gain wisdom on marriage from every helpful source you can.

I've earned a Ph.D. from Yale University, pastored an evangelical megachurch, hosted a nationally syndicated mainstream radio show, and written several Catholic best-selling books after being received into the Church. I've also been married to the same woman for more than twenty-six years. These experiences have given me wonderful opportunities to view, study, and aid marriages from a perspective that is up close and personal.

As a result, this book combines wisdom from many different sources. These secrets come from:

Your life and relationship will be enriched by these undeniable secrets of marriage.

The Church teaches that God himself is the author of marriage, and that marriage has been "endowed by him with its own proper laws" (Catechism 1603). My search for the secrets of marriage comes from a deep desire to understand God's laws for the relationship between a man and a woman.

Now, as my wife and I celebrate twenty-six years together, and with my own daughters moving toward marriage in their own lives, I am writing down these secrets for all to share. These twenty-one secrets of marriage make all the difference.

Embrace them and you will embrace life.

Will you be “getting away” this summer? Will you be taking some time off?

As a kid, I always looked forward to our family summer vacations. My dad loved to fish, so a resort on a lake in northern Wisconsin was our annual destination.

As kids, my siblings and I were constantly asking, “Are we there yet?” In the days before interstate highways, the drive seemed as long as the vacation itself. The first one to see the lake was the champ!

Recently, I came across 1 Peter 2:11-12, which I’ve paraphrased: “Traveling is a form of mortification, a reminder that, as Christians, we are exiled from our true home, and so should pass as strangers and sojourners in this world.”

Whether in our teen years or our sixties, recovering from an illness or going through a divorce, suffering from anxiety or overwhelmed with excitement, we are all on some journey. The choice is ours: to despair at the circumstances of our exile, or to hope for the goal God has in store for us.

This summer, take time every day to curl up in the classroom of silence to reflect on your life journey. It can be even more re-energizing than catching a boatload of fish. Every season has its own personality. Make the best of each, starting with this summer.

Where have you been? Where are you going? 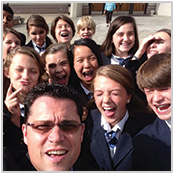 Our eighth grade students had a fantastic experience with the DECISION POINT program. When I came across the workbook, I knew it was the right thing for our students. I incorporated it into our religion class, and I taught it myself because I wanted to get a deep, first-hand experience. In short, I was blessed to be a part of it.

I read the responses to the discussion questions from each student and provided thoughtful feedback to them after each section. In this way, I came to know them and the spiritual journey they were on.

The students absolutely LOVED the program. They begged me to call their parish and recommend DECISION POINT for their Confirmation program! Each video kept the students engaged and left them with “big” questions to ponder (which I continually reminded them they weren’t too young to do). 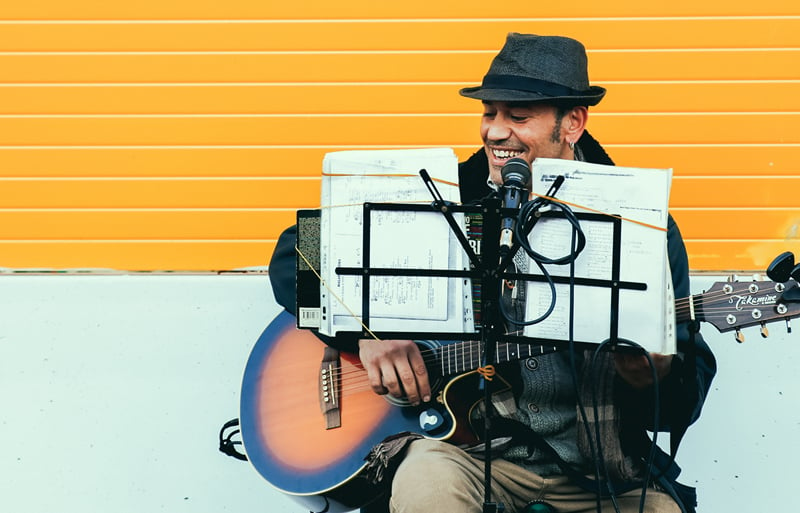 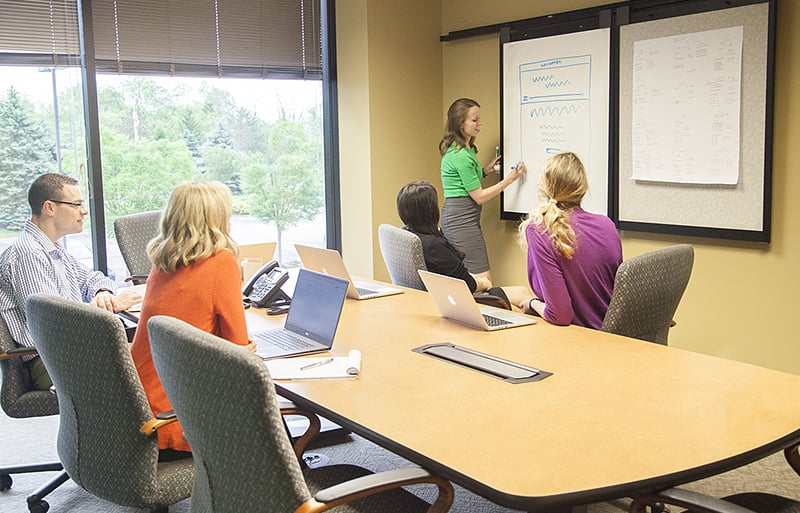 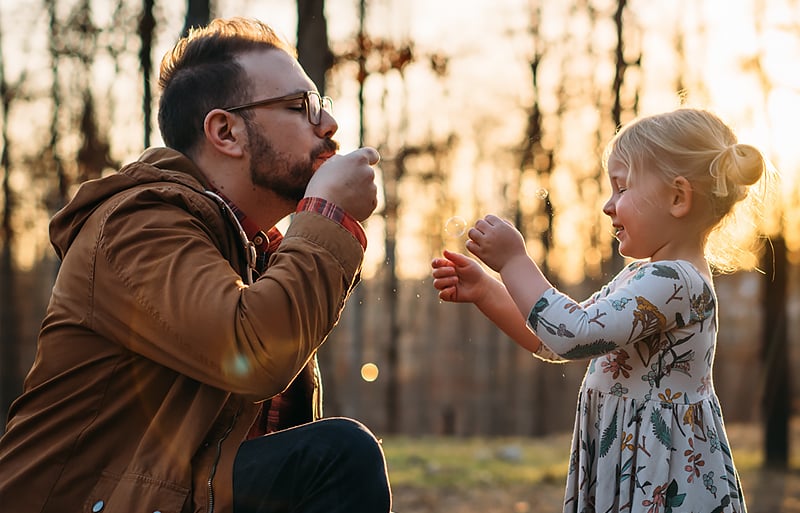 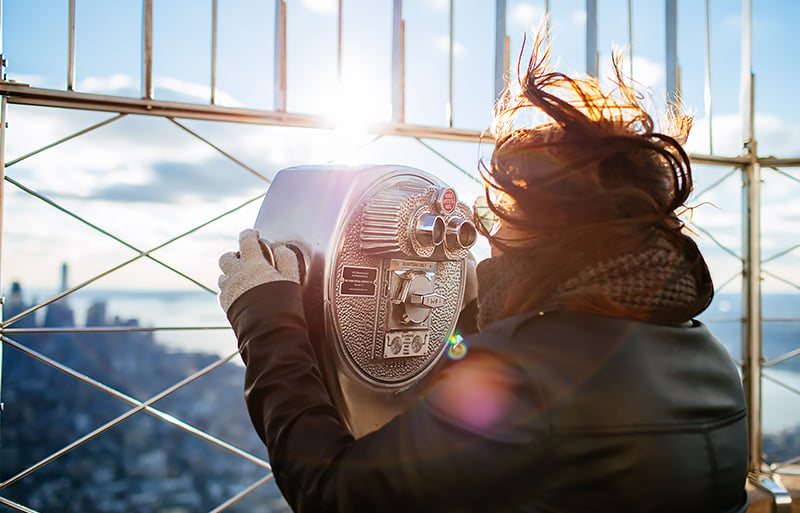